skip to main | skip to sidebar

Moon Tracks is back online. We are currently working on getting the appropriate SSL back in place. As such, some links from the Search Engines are not working correctly.  We hope to have that fixed before May is over.

We ended up purchasing a spot from a totally different webhosting service.  While we won't say who we were with, we will let you know that it had been acquired by EIG.  If you look at the list of EIG subsidiaries (aka acquired companies), and based on what I have since learned about EIG, these companies are likely to fail within the next few years (if they haven't already).  EIG keeps the brandnames, like Constant Contact, but restructures the companies with subpar support systems until all the profits are depleted and the companies eventually fail.

We will be keeping our attention on EIG from here on out. If we see that EIG  becomes involved in any company that we are working with, we will promptly stop the service and move our business to an organization that values its customers.

Thank you everyone for your patience as we move through this as quickly as possible.
Posted by LunarLiving at 2:35 AM

Working to get a new service up and running - the webhosting agency that we are currently with has been another failure for us. Have found out that the company was acquired by an organization that is known for depleting the companies of all their assets and letting them fail. So I have done some extra research to try to find a hosting agency that is on more solid footing. I am busy working on the IP resolution process which can take several days. Then I can start rebuilding. Check in on the Moon Tracks Facebook page for regular updates.

Thanks for your patience.
Posted by LunarLiving at 4:15 PM 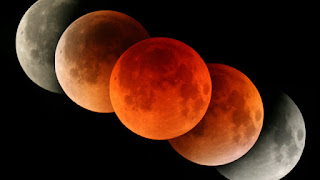 This full moon is the second in the month for most of the world, will appear larger in the sky because the moon is positioned closer to Earth, and will be a total lunar eclipse for approximately one-third of the world to see, where the sky is clear.

The full moon in Leo tends to be associated with children, matters involving the heart, feelings of loyalty, and expressing our creative side.

I have heard so many different descriptions of this Lunar Eclipse; the Super Blue Blood Moon  and the Super Blue Moon Eclipse are the two most common. Regardless of what we call it, this is not a routine moon event. Even more rare than a blue moon.

There still are no planetary retrograde motions for another month. Make good use of the productivity associated on so many different levels, but don't get burned out trying to do too much.

The partial Solar Eclipse on February 15 will also be the Chinese New Year.

The First New Moon of the New Year, in Capricorn, leads us into the first eclipses of 2018. This new moon chart appears low-keyed, at first. But after a good look, we realize there is so much power and determination packaged in this new moon, that we may need  extra time to adjust to the fact that there's nothing low-keyed here. Thankfully, there is adaptability built into this new lunation, and that gives us the power of introspection. If we use the power wisely, there is the potential for an extra benefit in it for us.

The Solar Eclipses of 2018 will happen February 15, July 13, and August 11, 2018. All three solar eclipses will be partial eclipses. None will be visible from the United States. In fact, all three are in regions where very few people will get to witness them. The February and July eclipses will be in the extreme south of the southern hemisphere while the August eclipse will be in the extreme north of the northern hemisphere for about two-thirds of the eclipse. It will sweep down into Northern Europe and Northeast Asia along the Pacific Ocean.

The Lunar Eclipses this year will be in January and July.

The January Lunar Eclipse is a total on the infamous Blue Moon, January 31 and belongs to the 124 saros series (of lunar eclipses). The locations that will get to experience the totality of the Lunar Eclipse are the western regions of North America, the majority of the Pacific Ocean, Eastern Asia and Australia.

The July Lunar Eclipse is also a total eclipse, two weeks after and before the July and August solar eclipses. This Lunar Eclipse belongs to the 129 saros series. The locations that will get the best views of the Total Lunar Eclipse are portions of  Asia, Africa and Europe, along with Australia and South America.

Posted by LunarLiving at 9:30 AM